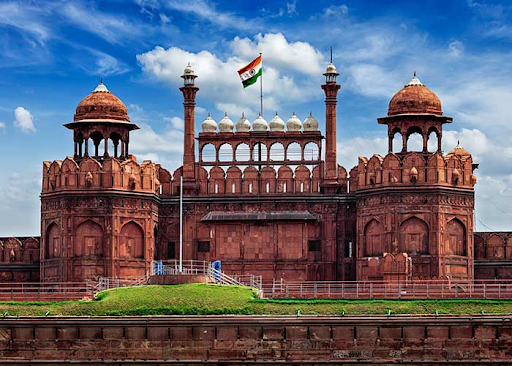 Red Fort (Lal Qila) is one of those monuments which enhance the grace of Delhi. The architecture of this building has a splendid impact of red stone and marble works. It has delicate carving on every possible surface.

'Red Fort' was built by the Mughal Emperor Shah Jahan. It is built of Stonewalls over 30 meters high in places. It was built on the right bank of river Yamuna . The foundation stone of the Fort was laid in 1639 and it was completed after about nine years .
The Red Fort was originally referred to as "Qila-i-Mubarak" (the blessed fort), because it was the residence of the royal family. The layout of the Red Fort was organised to retain and integrate this site with the Salimgarh Fort.
The planning and aesthetics of the Red Fort represent the zenith of Mughal creativity which prevailed during the reign of Emperor Shah Jahan. This Fort has had many developments added on after its construction by Emperor Shahjahan.

Welcome to Brainiak.in , where you can ask questions and receive answers from other members of the community ,

There is many categories for every students  CBSE , Maharashtra board , JEE , NEET  and we will add more categories

and make brainiak one of the most loved community of students .

Get Your advertisement on Brainiak.in Buy Adspace