The amount of heat energy required to raise the temperature of a unit mass of an object by 1 °C is called the specific heat capacity of that object. 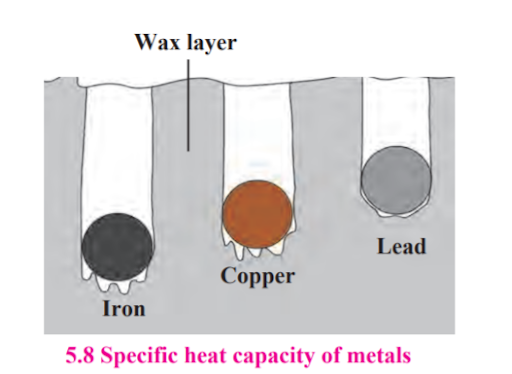 Take three balls of iron, copper and lead of equal mass and put them in boiling water for some time. Then, take them out of the water and measure their temperature. All of them will be at temperature 100oC. Now, put them immediately on the thick slab of wax. Note the depth that each of the ball goes into the wax. The ball which absorbs more heat from the water will give more heat to wax. More wax will thus melt and the ball will go deeper in the wax. It will be observed that the iron ball goes deepest into the wax. Lead ball goes the least and copper ball goes to intermediate depth. This shows that for equal rise in temperature, the three balls have absorbed different amounts of heat. This means that the property which determines the amount of heat absorbed by a ball is different for the three balls. This property is called the specific heat capacity.

Welcome to Brainiak.in , where you can ask questions and receive answers from other members of the community ,

There is many categories for every students  CBSE , Maharashtra board , JEE , NEET  and we will add more categories

and make brainiak one of the most loved community of students .